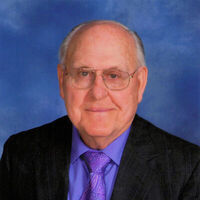 Ambrose S. Kodet was called to eternal life on Friday, May 20, 2022 at his home in North Mankato. Ambrose was born on July 28, 1934. He was the son of Adolph and Lydia (Senkyr) Kodet. He grew up on the family farm in Renville County.

A Memorial Mass will be celebrated at Holy Rosary Catholic Church in North Mankato at 11am, Thursday, May 26, 2022 with visitation one hour prior. Military honors will be provided by the Mankato Area Veterans Memorial Rifle Squad. A lunch will be served at church following the Mass. Burial will be in St. Joseph Catholic Cemetery in Waconia, MN. Northview ~ North Mankato Mortuary is assisting the family with arrangements.

In lieu of flowers, memorials may be directed to the Holy Rosary Catholic Church Building Fund.

Ambrose began his education and graduated from a one-room county schoolhouse in Beaver Falls township. He graduated from Morton, MN with academic honors in his high school graduating class in 1952. He earned a 21-month degree in Business Administration from Mankato Commercial College in 1954 and Bachelors and Masters Degrees in Business Education from Mankato State University in 1963/1964 and a Doctorate Degree in Business Education in 1969 from the University of North Dakota.

Ambrose married his wife of 57 years at St. Joseph Catholic Church in Waconia, MN in 1964. They had no children.

Ambrose had a life-long love for the concertina. He instructed 183 students in playing the concertina at Christy Hengel’s residence in New Ulm from 1970 to 1976. He played concertina and recorded for several bands, including the Ivan Kahle Band, Marv Kahle Band, Little Fishermen Band, Blanche Zellmer and the Waltz Kings, Cactus and the Jolly Brewers, Montgomery Czech Singers, and most recently with Don Sieberg. He also played many solo performances from nursing homes to public radio. He was inducted into the World Concertina Congress at Benton Harbor, Michigan, in 2004. He did engraving of concertina frames and nameplates for the entire concertina industry from 1994 to 2014. He also assisted in manufacturing the concertina for two concertina manufacturers.

He completed 36 months in the Army doing personnel work at Brooke Army Medical Center in San Antonio, TX, toward the end of the Korean War with an honorable discharge in 1958.

Ambrose is preceded in death by his parents; parents-in-law; his wife, Lois, in 2021; brothers, Melvin and Gerald; and sister, Frances. He is survived by his sister, Laura; special friends and caregivers, Dennis and Judy Kodet; and four nieces and two nephews.

To order memorial trees or send flowers to the family in memory of Ambrose Stanley Kodet, please visit our flower store.