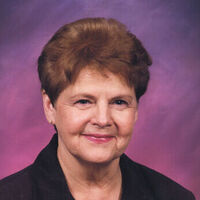 Ardis “Ardie” Jane Detjen, age 85, went home to be with Jesus on March 13, 2021 after a long battle with Alzheimer’s disease.

Funeral service will be held at 11am, Thursday, March 18, 2021 at Hosanna Lutheran Church in Mankato with visitation starting at 9:30am. Burial will follow at Glenwood Cemetery. The service will also be livestreamed at www.hosannamain.online.church. Please share a memory of Ardie online and view her photo tribute at www.mankatomortuary.com.

Ardis Brink was born on February 9, 1936 to Helen and Milton Brink. She was one of 8 sisters. In 1954, Ardie moved to Mankato after coaxing from her sister, Doris, and began a job as a nanny for John and Peggy Sexton. Not long after starting her job, John and Peggy introduced her to William Detjen, who worked for John.

Ardie and Bill were married in 1955. They eventually had three children, Pam, Randy and Rich. Ardie was a full-time homemaker until her youngest started third grade, when she began working for District 77, first collating in a basement and eventually working full-time as the front desk secretary at Mankato West High School. Her friendships at West High School carried her through two very hard times, including the passing of Bill and a few years later, her youngest son, Richard, who was killed in an accident on his dog sled in northern Minnesota.

Ardie loved to camp, fish, walk, and was especially gifted in sewing, knitting and embroidery. Most summer weekends were spent as a family at Scenic State Park near Bigfork, MN, along with yearly family vacations that took them to National Parks all over the United States.

Long-time friend, Ralph and special, special sister, Carol, helped Ardie keep her joy. She visited casinos when she could, but probably preferred the buffet to gambling.

Ardie’s love for small animals was genuine and heartfelt. Watching out a window for a few minutes with her, at a squirrel, a bird, or a bunny, was time well spent.

Ardie enjoyed being a grandma to Billy, Bob, Andy, Nick, and Jordan. She seldom missed a swim meet and enjoyed sleep overs and trips to Baker’s Square for pie. With more time, she would have enjoyed just as wonderful relationships with great-granddaughters, Rosie, Daisy, Maggie, Nova, and great grandson, Beckett.

Her humor and own little bit of sass will be missed and impossible to replace. Her friendships and care at Birchwood Memory Care were instrumental in helping her family and Ardie through her illness, where she was loved. Special thanks as well to the loving care given through Mayo Health Care System’s Hospice Program. She will be so missed.

To order memorial trees or send flowers to the family in memory of Ardis "Ardie" Jane Detjen, please visit our flower store.