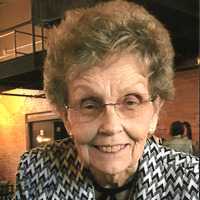 Funeral Service 11:00 a.m., Monday, January 3, 2022 at Grace Lutheran Church, Mankato.  Visitation will be one hour before service at the church on Monday.  Interment will be in Woodland Hills Memorial Park, Mankato.  Memorials maybe given to Grace Lutheran Church.  Northview – North Mankato Mortuary is in charge of arrangements.

Arline was born May 26, 1927 to Ruben and Emma M. (Tillman) Peterson in Belgrade Township, Nicollet County, Minnesota.  She graduated from Mankato High School in 1945.  Arline was united in marriage to Howard A. Gillson on May 24, 1947 in Mankato.  She was a member of Grace Lutheran Church, Mankato.  Arline enjoyed watching the MN Twins, attending her grandchildren’s sporting events, and being with her family and friends.  She was proud of keeping a very immaculate house.

To order memorial trees or send flowers to the family in memory of Arline M. Gillson, please visit our flower store.