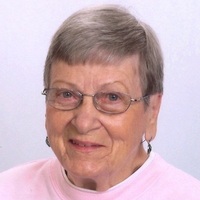 Barbara Jean Waters-Arneman went home to be with the Lord on September 16, 2020.  Celebration of Life will be held at a later date. Mankato Mortuary is assisting the family with arrangements.

Barbara Jean Sellden was born to Klas Arvid Sellden and Marie Johanssen Sellden on October 31, 1929, on Halloween in Storm Lake, Iowa. She often referred to herself as a “tomboy” and grew up playing sports with all her older brother’s pals. She graduated from Storm Lake High School in 1948 and was the president of her junior class, the president of G.A.A., and a varsity cheerleader. Her first job after high school was a switch board operator and soon met her future husband Jim Waters, a star athlete at Buena Vista College. They were married on June 6, 1949 and lived in a small cabin on Storm Lake.

After graduation, Jim received a semi-professional baseball offer and the family moved to Fairfax, Minnesota in the summer of 1951. Jim died unexpectedly of a coronary thrombosis on December 3, 1958. Barb stayed in Fairfax and raised her 4 children there. She was actively involved in the legion auxiliary, card club, the Methodist Church, being a leader in both cub scouts and girl scouts and enjoyed golf to keep her active. With 4 kids, she was also the proverbial chauffeur for her children and many others. Her love and concern for her children and others in the community brought many to the Waters household for some rollicking dancing in the basement.

In 1965, Barb took her family and moved to Mankato to find employment for herself and provide a college for the children to attend. Barb became actively involved as a spokesperson for Solo Parents and eventually was the national president for the organization. She was always visible in Mankato with her involvement in MYF, Job’s daughters. She could also be found at the Eagle’s club, any place where there was bingo, the St. Peter Card Club, quilting at Hosanna Lutheran Church, and at many live musical events in the Mankato area. She worked at Montgomery Ward’s catalogue department, Brett’s department store and Mankato State College where she retired.

In 1988, she married New Richland farmer George Arneman. They enjoyed 20 years together traveling around the world and living in homes in New Richland, on a lake in northern Minnesota, a winter home in Mesa, Arizona and their homestead in Mankato. Her annual trips to Mesa, AZ. also provided her the opportunity to connect with many former Storm Lake classmates and friends at the annual S.L. reunions

Barb was loved and cherished by friends and family from all over the country.  She had lifelong friends from Storm Lake High School, Fairfax and numerous high school students who knew and loved her, and friends from Mankato.  As a family, we are so grateful to her very special care givers at Monarch Meadows.

To order memorial trees or send flowers to the family in memory of Barbara Jean (Waters) Arneman, please visit our flower store.