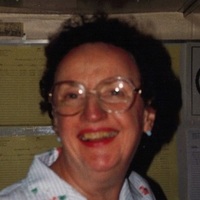 Bernadine (Bernie) was born in 1931 in Mankato to William F. and Anna L. “Nora” (Bresnan) Kopischke. She was the fourth in a family of six children. She attended Mankato Catholic Schools, graduating in 1948 from Loyola High School. She attended and graduated from Mankato Commercial College. She worked for Gamble Robinson Food Distributors in Mankato as Office Manager for many years. She later worked for The Salvation Army as a bookkeeper until she retired.

Initially, Bernie and Lou enjoyed their time together at their retirement home on Kid Lake in northern Minnesota. As life’s challenges mounted, they moved back to Mankato and eventually became residents at Pathstone Independent Living Facility in Mankato.

Bernie was a sweet, intelligent woman with a wonderful dry wit and a great sense of humor. She loved cats, dogs, reading, crosswords, jigsaw puzzles, painting, crafts and spending time with family.

She is survived by Louis’s extended family; her sisters, Caroline McCargar Jones and Rosalie (Donald) Adams; and many nieces and nephews.

Private family graveside service will be held at Calvary Cemetery in Mankato. Please share a memory of Bernadine with her family and view her recorded service (available by Saturday, December 12) online at www.mankatomortuary.com.

Memorials may be directed to The Salvation Army, The American Cancer Association, or to a charity or organization of the donor’s choice.

To order memorial trees or send flowers to the family in memory of Bernadine Ann (Kopischke) Vermeersch, please visit our flower store.