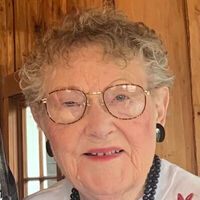 A private funeral and reception will be held in early October. Mankato Mortuary is assisting the family.

Beryle was born in Mankato, Minnesota on September 6, 1928 to Anton Robert Julius Pagenkopf and Vera Faye (Sage) Pagenkopf. She grew up in Mapleton, Minnesota where she graduated from high school. Later she attended the Mankato State Teachers College and married the love of her life, Wayne Delbert Ward on November 15, 1947. They farmed together until they moved to Texas and then Bricelyn, MN in 1963. While in Bricelyn, Beryle worked with her husband for State Farm Insurance and then at Winnebago Industries. When they moved to Bemidji in 1977, Beryle went back to school for her tech degree in Business Management and worked at Control Data/Nortec until she retired in 2008.

Beryle loved spending time with family camping, fishing, and traveling. Throughout her life, family was most important. Beryle was a ruthless card player and kind friend who was always helping everyone. She was a strong independent woman who would plow her own driveway, drive a tractor, and figure out just about anything. Even in her late 80s she would help roof a shed and put up insulation. She never sat still.

In her free time, Beryle was involved in her church teaching Sunday School, as a member of the Federated Women’s Club and past Blue Earth County President, Past President of P.J.O in Briceclyn, Aux President of the American Legion, and Past Matron of Eastern Star in Bemidji.

To order memorial trees or send flowers to the family in memory of Beryle Ward, please visit our flower store.