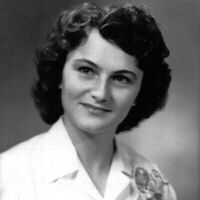 A Funeral Mass will be held on Saturday, April 30, 2022 at 11:00 a.m. at Holy Rosary Catholic Church in North Mankato, MN with visitation one hour prior to Mass. Mankato Mortuary is in charge of arrangements. In lieu of flowers, memorials preferred to donor’s charity of choice.

Beverly was born on June 12, 1930 in Detroit, MI to Percy and Rose (Falcona) Soper. She attended SS Peter and Paul Catholic School and Good Counsel Academy. In 1951, Beverly was first runner-up Miss Mankato. Beverly was married to John Delyea in 1952. John was in the Air Force and stationed in Germany where they lived during the Korean War.  When they returned to the US they settled in Framingham, MA and then moved back to Mankato where they later divorced. She worked in Mankato for Dr. Tollefsrud as a dental assistant for many years.  She enjoyed time spent at the lake with her brother Harold and his wife Arlene. Beverly liked dancing and listening to music. She had a love for animals, especially her beloved dog Tippy.

To order memorial trees or send flowers to the family in memory of Beverly Ann Rose Delyea, please visit our flower store.