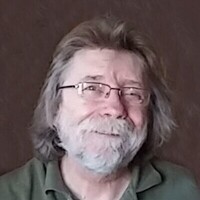 Brady is deeply missed by his wife of 30+ years, Colleen Flowers; daughters, MaDonna (Flowers) Sheehy and husband Mark, Lydia, and Ellen (significant other, Nick); granddaughter, Charlotte; cousins; nieces, and nephews. He was preceded in death by his parents; aunts, Phyllis, Meta and Vivian.

Soon after high school, he traveled to live in the beautiful mountain town of Oak Creek, Colorado. He moved back to Mankato in the 70s. He played rock and roll music in a variety of bands, spent time working at Kato Cab, acted as Dungeon Master for many Dungeons & Dragons campaigns, and went to school at Mankato State University. He taught at the University and graduated in 1980 with a degree in Math, Astronomy, and Physics.

In 1984, Brady met his wife, Colleen, while his band was playing at the Drawbridge Bar in Little Falls, MN. They were married September 16th, 1984, in Little Falls, MN. The two lived in Mankato together, where Brady began working as a computer programmer at CWC. He eventually started his own company, Oberon Software, in 1992, and in 1997, he began his 18-year career as a Senior Software Technician at IBM.  He retired in 2017.

Brady loved to spend time with his family – watching movies, listening to music, reading, playing video games, and traveling with his daughters to places like Tokyo, NYC, and London. Along with his family, Brady was a member of Merely Players Community Theater, and acted in many productions during the 1990s. He was also involved in Mankato community efforts, including the planning of the Riverfront Park.

To know Brady was to know a kind-hearted, smart, goofy, and down-to-earth friend. He was always excited to have a conversation with anyone, whether it was about politics or complex math theory, and was even more excited for a chance to tell a cheesy pun. He was a patient, fun, and loving father, and he influenced all three of his daughters greatly—both in interests and values.

A private family service will be held.

To order memorial trees or send flowers to the family in memory of Braden "Brady" Ralph Flowers, please visit our flower store.