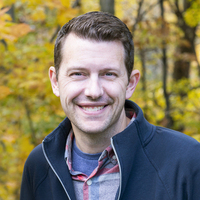 Brandon Terrell, 42, loving husband, father, son, brother, uncle, friend, and the author of nearly 100 books for children, died January 4, 2021, surrounded by his family after a valiant battle with cancer.

Brandon grew up in Eagle Lake, Minnesota. As a kid, he loved the Hardy Boys, comics, and Stephen King novels. That passion as a reader laid the foundation for a life steeped in storytelling.

Brandon graduated from East High School in 1996, where he was active in the theater scene and attended the Minneapolis College of Art and Design (MCAD), where he studied filmmaking. Brandon could spend a long lunch, a late afternoon, or an all-nighter talking film, children’s literature, comics, sci-fi, and horror. As with many things in Brandon’s life, it’s fitting that he shared a first date with his wife, Jennifer Frederick Terrell, at a group movie outing to Scream 2 twenty-three years ago, in a theater so crowded they sat together on the floor.

Jen and Brandon grew up not far from one another, sharing Mankato farming roots celebrated by large extended family gatherings and love. These sweethearts married on October 2, 2004, then made St. Paul their home. In 2009, they welcomed their first child, Alex. Daughter Stella was born in 2012. Brandon’s love of everything books, Star Wars, baseball—especially the Minnesota Twins—his sweetness, goodhearted goofiness, his love of the arts, and storytelling are traits he’s passed on to both his children.

Brandon published his first book in 2009, Dodger Dreams: The Courage of Jackie Robinson, and continued writing and working as a freelance author for Capstone Publishing and other publishers over the next eleven years.

Brandon worked as an assistant director and a producer on numerous independent films and commercial productions, and as a writer on the Choo Choo Bob Show during its 2012 inaugural season.

In 2019, Brandon graduated from Hamline University with a Master of Fine Arts in Writing for Children and Young Adults. His diagnosis earlier that year didn’t stop him from finishing his graduate studies and penning three novels and critical papers on the interconnectedness of film and literature along with his freelance work for Capstone.

Brandon loved picking up his Wednesday comics, and drawing from the friendship and professional support of his children’s literature community in Minnesota, his film club, and friends from MCAD days. Brandon was a nerd in every good way. His ability to tell stories, crack a joke, especially a great or groan-worthy dad joke, helped lighten a room, ease tensions, whether he was on set, at a comic convention, or meeting new friends for the first time.

In 2020, Brandon signed with a literary agent and revised his middle-grade novel about aliens that land in a quiet Iowa farm town the same night that Orson Welles terrorized the nation with his radio play The War of the Worlds. He continued to write and work on his novels until the end.

In Brandon’s memory, consider picking up a Stephen King novel or a comic book, re-watching the Mandalorian, reading an old Hardy Boys adventure, and saving an open seat for the next Star Wars movie. In his honor, share a memory made— a celebration of family and life.

Brandon is survived by his wife, Jennifer and their children, Alex and Stella; his mother, Linda Terrell; his big sister, Trina Terrell; brother in law, Jim Tiernan; in-laws, Nick and Linda Frederick; sister in law, Tracy Corcoran; nephew, Kaleb; and niece, Katelyn. He was preceded in death by his father, Larry Terrell.

In lieu of flowers, the family requests those who wish to express sympathy to consider making a donation to Alex and Stella’s education funds at https://www.ugift529.com/ (Alex X8E-36Q) and (Stella Q4Q-G8E) or donations in Brandon’s memory can be made to: The Roseville Library or your favorite cause.

Since not everyone is able to join us in person, please join us for a livestream of the private ceremony on Sunday 1/17/21 at 6:30pm. https://terrelljenny7.wixsite.com/website/post/livestream

To order memorial trees or send flowers to the family in memory of Brandon Terrell, please visit our flower store.