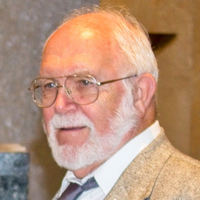 There will be a small private celebration of Bryan’s life this spring.

Bryan was born May 31st 1932 in Montgomery, MN to Bryan and Martha Barger. After the death of her first husband, Martha married Theodore Klages (best stepfather ever) in 1941 and they moved to Mankato, MN.

Bryan graduated from Loyola High School in 1950 and joined the Navy. While in the Navy he spent time in Guam and California during the Korean War.

On November 15th 1958, Bryan and Claudia Tauer of Sleepy Eye, MN were married. Shortly after they moved to a small farm along the Maple River near Good Thunder, MN. Bryan worked for 30 years at Little Giant/Dotson of Mankato and then retired in 1996 after 10 years with Blue Earth County.

While raising his 6 children and working full time he built the farmhouse where they live to this day.

Over the years he enjoyed raising many types of animals on the farm along with canoeing, fishing, camping, wood carving, knife making and repairing things. He enjoyed teaching his kids and grandkids these skills. He was also a voracious reader of history and current events.

He enjoyed his family most of all, wife, Claudia and six children, Dan & Cheryl (Birr), Ann & Dan (Hawkes), Paul, Pat & Gina (Keenan), Joe & Mona (King) and Bob & Molly (Schuman). He was a great husband and father to us all.

To order memorial trees or send flowers to the family in memory of Bryan P. Klages, please visit our flower store.