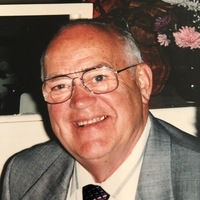 A celebration and memorial mass will be held 11:00 a.m. Saturday, September 12, 2020 at St. John the Baptist Catholic Church with Rev. John Kunz officiating. There will be a brief time to visit with the family 30 minutes prior to the service at the church on Saturday. Masks and appropriate social distancing will be required. Burial with military honors will follow at Calvary Cemetery. Please feel free to share your condolences to the Frost family at www.mankatomortuary.com

Chuck (Charlie) was born January 23, 1923 to Charles and Delphia Brandenburg Frost in Minneapolis. He was the oldest of 5 siblings. Chuck and his family moved to Mankato when he was a young child.  It was here that he found his strong sense of community. Charlie attended and then graduated from Mankato High School in 1941.

Chuck enlisted in the US Army Air Corp in 1942 and served his country with honor during WWII as a B-17 pilot flight instructor.  Throughout his life, Chuck was proud of his service to his country and truly embodied the hard work and pride of “The Greatest Generation.”

On September 14, 1944, Chuck married his high school sweetheart and love of his life, Katherine (Kay) Mary Thro at St. John’s Catholic Church in Mankato.  After the conclusion of the War, Chuck followed in his Father’s footsteps and pursued his degree in Pharmacy from South Dakota State College, graduating with the class of 1949.

Chuck and Kay returned to North Mankato where he worked as a Registered Pharmacist alongside his Father in-law, Cliff Thro, at Thro Drug. In 1972 Chuck bought the North Mankato Pharmacy and renamed it Frost Drug. His trademark smile and unfailing positive attitude always ensured a warm welcome at the Pharmacy. He genuinely enjoyed being a Pharmacist and served his community for over fifty years. Throughout this time, he touched many lives.  He found great reward in counseling patients and customers, many of whom became lifelong friends.

Outgoing and social, Chuck and Kay enjoyed their time with family and friends traveling, camping, hunting and fishing.  Saturday night Poker Club was a favorite of theirs for over 53 years. Chuck was very active in numerous professional and civic organizations. He was a Board Member of the Minnesota State Pharmacy Association, co-founder of the Southern Minnesota Pharmacy Association Chapter, recipient of the Bowl of Hygeia Award for 50 years of service to the Pharmacy Profession, Past President of the North Mankato/Mankato Rotary Club, served as an officer for the North Mankato Civic and Commerce, member of The American Legion, Disabled American Veterans, Ducks Unlimited, Pheasants Forever and Katoland Connection.  He was a dedicated member of Holy Rosary Catholic Church and St. John’s Catholic Church.  He was especially proud of being a lector at Holy Rosary for many years.

Above all else, Chuck cherished his wife of 66 years Kay and was immensely proud of their ten children.  He treasured time with his family and instilled in them the love for family.  He was a beloved husband, Father, Grandpa, PaPa and Great Grandfather.  His amazing legacy now lives on in their children, 23 grandchildren and 16 great grandchildren.

He was preceded in death by his beloved wife Katherine, daughter Ann Frost Sobraske, sons-in law Ed Sobraske and Rick Iverson, his parents Charles and Delphia, his in-law’s Cliff and Cora Thro, his brothers Paul, Creighton and Frederick Frost.

Chucks family is very grateful for the kind and compassionate care he received from the amazing Whispering Hills staff at Hillcrest Rehabilitation Center.

In lieu of flowers, memorials are preferred to the: Alzheimer’s Association- Minnesota chapter or Mankato Area Catholic Schools

To order memorial trees or send flowers to the family in memory of Charles Francis Frost, Sr. (UPDATED), please visit our flower store.