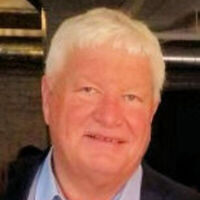 Christopher Alan Painter, 68, of North Mankato, passed away unexpectedly June 14, 2021 at his home.

Memorial service will be 11:00 a.m., Tuesday, June 22, 2021 at Our Savior Lutheran Church in Mankato. Visitation will be from 4-7 p.m., Monday, June 21, 2021 at Northview-North Mankato Mortuary, 2060 Commerce Drive, North Mankato and one hour prior the service at the church. Livestreaming will be available at www.mankatomortuary.com.  Memorials may be given to South Central North Mankato Foundation or donor’s choice.

Chris was born April 4, 1953 to Richard Sr. and Betty (Tremayne) Painter in Great Bend, Kansas. The Painters moved the family to Mankato in 1969 because Dick accepted the position as GM of KYSM radio. Chris graduated from Wilson Campus School in 1971. He attended Mankato State University while working at Wilson’s Clothing in the Madison East Mall. On August 5, 1978, he married Denise Mensing. Together they raised two children, Lindsey and Zac.

Chris worked for over 40 years until his death in local radio in sales and management. He also did color commentary on the radio, broadcasting for Minnesota State University, Mankato for basketball and football. Chris was a booster for MSU sports and is being inducted into the MSU Sports Hall of Fame this year. He also helped sponsor and organize the SCC golf tournament and many other fundraising activities. He enjoyed taking part in numerous Mankato community events.

He began his love for golf as a caddy at the local golf course in Great Bend, Kansas.  He was an avid golfer and member of the Mankato Golf Club for over 50 years. He made many lifelong friends there playing golf, gin, and socializing. Chris was a diehard sports fan watching most games from the comfort of his “chair”. He was also a music lover, especially classic rock among others and loved going to concerts and meeting the musical talent backstage. You would often see him in many local restaurants striking up conversations with friends, strangers, and staff alike. He was a constant ambassador to Mankato and local businesses. Chris was known by many as “Paint” or “Big Curly” and always had a story to tell. He had a heart of gold and always tried to brighten your day. Chris’ all time favorite pastime was spending time with his family and precious grandchildren.

To order memorial trees or send flowers to the family in memory of Chris Painter, please visit our flower store.