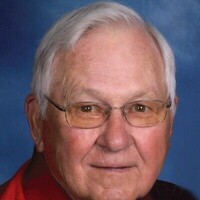 Clair was born October 1, 1929, to Walter and Grace (Hughes) Meredith in Judson Township, Blue Earth County. He attended Lake Crystal Public Schools, graduating in 1948. Following graduation, he went to The Dunwoody Institute in Minneapolis. He began working at Kato Engineering in Mankato in 1949 and retired from Kato in 1994. He was also very active in the family catering business. Clair was married to Verba J. Williams on September 25, 1950. Together they raised three daughters in their home on South Main Street in Lake Crystal. He was an active member of First Presbyterian Church, a 50+ year member of Bethel Lodge 103, a founding member of the Lake Crystal Jaycees, and a member of the Rodeo Days Committee.

He was preceded in death by his wife, Verba, in 2006; his parents, Walt and Grace; a daughter, Marlys Jane, at birth; brother-in-law and sister-in-law, Chuck and Marilyn Williams; and brother-in-law, MacArthur Tisdale.

Clair will be remembered by his family as a selfless doer and caregiver, proud father, grandfather, and Taid. He was always the first to show up with his tools for family and friends needing any kind of assistance, and caring for his ailing wife for several years before her death, traveling far for gymnastics meets, and in the front row at every performance of his grandsons’ country band. People comment often on his kindness and his smile. He lived a good life and will be missed by all who knew and loved him.

To order memorial trees or send flowers to the family in memory of Clair E. Meredith, please visit our flower store.