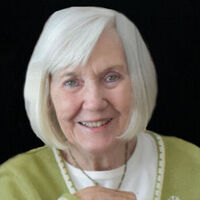 Mass and celebration of her life will be held at St. John the Baptist Catholic Church, Mankato at 10:30am, Tuesday June 29, 2021 with visitation one hour prior. Burial will take place at Fort Snelling National Cemetery at a later date. Please share a memory of Colleen with her family and view her video tribute online at www.mankatomortuary.com.

Memorial gifts can be directed to The American Cancer Society.

In November 1953, she married Leon R. Lease in Minneapolis. They moved to Mankato where they raised their family of five children. They later divorced. She married David M. Jackson in June 1981 and they resided in rural River Heights, Mankato until January 2020 when they moved to Maple Grove. David passed away February 1, 2020.

She was a long-time member of St. Joseph the Worker Catholic Church and then later at St. John the Baptist Catholic Church. Colleen was a life member of the Minnesota Association of School Business Officials serving on its board for eight years and as President in 1995-96. She served on the board of the Blue Earth County Historical Society and Rapidan Township. She enjoyed time with her family and travel with her husband in the US, Europe, and Central America.

To order memorial trees or send flowers to the family in memory of Colleen J. Jackson, please visit our flower store.