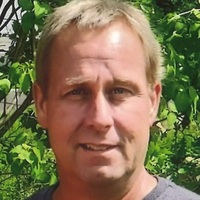 Dale James Schneider, age 51 of North Mankato passed away after a long courageous battle with cancer at his home on Friday, January 7, 2022 while holding his wife’s hand. Visitation will be held from 4-7 p.m., on Thursday, January 13, 2022 at Northview – North Mankato Mortuary.

Dale was born on August 4, 1970 to Les and Phyllis Schneider. He graduated from Loyola High School in 1989 and was a graduate of South Central Technical College. Dale worked for 33 years at Taylor Corporation where he met his future bride. They spent over 20 years together before marrying on May 29, 2021. He also served as a volunteer for the North Mankato Fire Department for over 3 and half years.

Dale loved to buy anything with a motor or an engine. He would spend from morning till night in his favorite place, the garage. Dale could take anything apart, fix and restore it. Buy, restore and flip, that was him. He was there for anyone who needed him. Especially if it came to a car, Dale could fix anything with wheels and that passion was passed down to his son Jordan.

A special thank you to Becca and the team at St. Croix hospice.

Even though his life was cut short, many wonderful memories of good times shared will stay in the hearts and minds of those who knew him best. He will be missed, but never forgotten.

To order memorial trees or send flowers to the family in memory of Dale James Schneider, please visit our flower store.