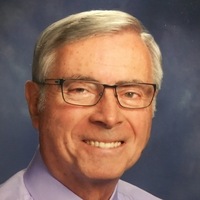 David Lawrence Hooge, of North Mankato, MN went home to be with his Lord on September 22, 2021, at the age of 86. He bravely battled cancer for 4 years.

David was born February 3, 1935, in Windom, MN, to Abraham and Helen (Derksen) Hooge. He grew up on the family farm with his four brothers. David had an early interest in radio, airplanes and mechanics; his mother lovingly referred to him as her “question box.”  He accepted Christ when he was 12, served him faithfully and always expressed his desire that others would also know Jesus as their personal Savior. A member of Grace Baptist Church since about 1961, he served as deacon, treasurer, and choir member. He volunteered countless hours on the sound and electrical systems, and numerous other tasks. David married Alice Loewens in 1956; they were married for 65 wonderful years.  Licensed in broadcasting in 1955, he began working at KEYC-TV from its inception in 1960. He was employed fulltime there for about 40 years, 30 years as Chief Engineer.  He continued part time work there until this spring. He was a diligent worker, but knew how to make time for his wife and family. David always loved the water; swimming, sailing and snorkeling were some of his favorite activities. He also enjoyed jigsaw puzzles, radio-controlled airplanes and reading technical journals and nonfiction.  He loved singing and listening to music, especially pipe organ turned to a high volume. Travel took David and Alice many interesting places, across America, to Europe and numerous tropical locations.

David is survived by his wife, Alice; daughters, Roxanne (Tim) McCullough, and Susan (Bradley) West; son, Mark (Holly); and daughter Beth (Mark) Clouse. David had nine grandchildren and nine great-grandchildren. He was preceded in death by his brothers, Melvin, Vernard, Willard and Edgar; Melvin went home to be with the Lord just one week before David.

To order memorial trees or send flowers to the family in memory of David L. Hooge, please visit our flower store.