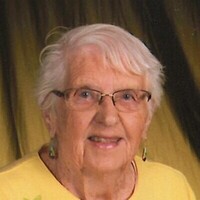 Deloris was born April 7, 1920 to Fred and Tina (Schleusner) Nelson in Mankato. She was baptized at Immanuel Lutheran Church and confirmed at Bethlehem Lutheran Church. Deloris graduated from Mankato High School in 1938. In May of 1938, Deloris married Howard Sheehan. Howard died on June 21, 1943. She married Woodrow “Woody” Guenther on February 21, 1946. Woody died on June 21, 1990. Deloris worked at Burke’s and Brett’s, retiring in 1972.

She was a member of Bethlehem Lutheran Church. Deloris enjoyed her volunteer work at ECHO Food Shelf, Hot Meals on Wheels, with her church, and spending time with her family. Many summers were spent at their cabin on German Lake. She was a Good People Jefferson Award Winner in 2004.

To order memorial trees or send flowers to the family in memory of Deloris G. (Nelson) Sheehan Guenther, please visit our flower store.