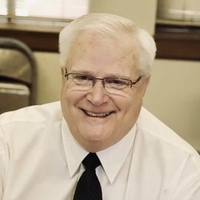 Our father and beloved grandfather Dennis Thorsen has reunited with the love of his life, Judy Thorsen. He will be remembered as a caring and loving son, husband, father, grandfather, friend, educator, and devoted Iowa Hawkeye fan; with a special gift of being able to connect with anyone, young or old.

Dennis Thorsen (age 73) of St. Peter, MN was born to DeVon and Lois Thorsen in Charles City, Iowa on January 25, 1947.  Denny had a heartfelt connection to his parents and grandparents and was always present in their lives. The stories he shared of his parents with his family and grandchildren brought together each generation. We all heard stories about times up north with his grandparents at Red Lake and the unimaginable adventures they had while visiting family. His deep love for his hometown of Charles City played a role throughout his life, and is where he developed a love for music and the marching band.

After high school, he attended the University of Iowa majoring in music and was a member of the Hawkeye marching band as a trumpet player, having the unique opportunity to tour Europe with the collegiate band. After graduating from the University of Iowa he followed the footsteps of his father and joined the 5th US Army Band where he was fortunate to play for President Truman and Johnson’s state funeral.

After his time in the military he decided to pursue a new passion in education with a focus in special education from Mankato State University, earning his Master’s in Special Education and later a degree in Education Administration. Throughout his career he served as the Director of Special Education for a number of school districts in southern Minnesota, advocating for all children especially those with special needs. This passion also introduced him to the love of his life, Judy.

When they were first dating, Judy would pick him up in her candy apple red ‘64½ Mustang convertible. They soon married at the Little Brown Church in Nashua, IA and he embraced becoming a father for Judy’s daughters Amy and Bobbi Jo. In the early years of their marriage they lived in New Ulm, MN where they welcomed two daughters Kari and Kate before moving to Rochester, MN.  Their lives revolved around their family and they stayed busy antiquing, attending sporting events and music programs. They cherished those times and always put the family’s needs above their own, even during the difficult years when Judy was fighting cancer. Denny’s strength and compassion over the next nine years forged their love and continues to serve as an inspiration for their whole family to this day.

After his retirement, he found joy spending time with his family at the cabin fishing and boating. He loved playing card games with his children and grandchildren, continuing to share funny stories of his life and reminding everyone of the importance of family. He enjoyed reading, spending time with the dogs, and keeping the family up to date on the Hawkeye’s, every season, every day. He was actively involved in his grandchildren’s lives and their activities and kept in touch daily with his daughters, offering constant presence, support and encouragement.

Outside of family his daily ritual included the River Rock Coffee group with his friends, discussing the inner workings of St. Peter and solving the worlds problems. He kept in touch with many of his friends from high school and college and they always picked up right where they left off. He was a long-time member of the Hilltop Methodist Church, involved with the Lion’s Club, and was a generous supporter for numerous charitable organizations.

Dennis Thorsen passed away on May 21, 2020 due to complications of a stroke. He will be deeply missed and cherished by all those who loved him.

In lieu of flowers, please send memorial funds to the Special Olympics of Minnesota or the University of Iowa Stead Family Children’s Hospital, to encourage the next generation of Hawkeye’s.

A Celebration of Life will be held at a later date when public gatherings are permitted.

To order memorial trees or send flowers to the family in memory of Dennis Allen Thorsen, please visit our flower store.