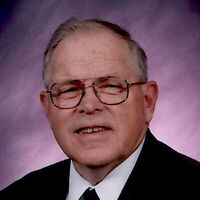 Charles Richard "Dick" Renfroe, age 90, passed away peacefully on February 20, 2021, at home surrounded by his family.

Dick was born on December 22, 1930 in El Dorado, Kansas to Charles Enoch and Zola Pearl (Harvey) Renfroe.  He spent the first few years of his life in Kansas and Oklahoma before finally settling down roots in Mankato in 1940.

In 1961, Dick married the love of his life, Delane Grace (Faust) Renfroe, and together they raised three children, Richard, Brian and Rhonda.  Dick and Delane also enjoyed being foster parents for several children and host parents for International Students at Mankato State University.  They were members at Sunrise Assembly of God church in St Peter, MN.

Dick worked at Northern States Power in Mankato for over 35 years where he made many friends with his easy-going style and his ability to make people laugh.  Dick had many hobbies and interests, but he most enjoyed spending time with and bragging about his grandchildren, Jack (21), Sabrina (20), Allison (20) and Zola (10).  He made every effort to attend every game of baseball, football, hockey, softball, dance, volleyball or recital they had.  He was the first one to congratulate them and tell them how much he loved them.

Dick was preceded in death by his father, Charles and his mother, Zola. Dick was greatly loved and will be dearly missed by his wife Delane; sister, Shirley Newman of Florida; children, Richard (Robyn) Renfroe of Woodbury, MN, Brian (Becky) Renfroe of Prior Lake, MN, and Rhonda Renfroe (Janna Ahlers) of Prior Lake, MN; grandchildren, Jack, Sabrina, Allison, Zola; and many other relatives and friends.

In the event of technical live streaming issues, a recorded version will appear following the service.

To order memorial trees or send flowers to the family in memory of Dick Renfroe, please visit our flower store.