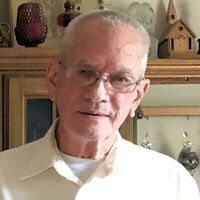 Funeral service will be held at 11 a.m. on Thursday, December 17, 2020 at the Berea Lutheran Church, 9308 Rich Valley Blvd., Inver Grove Heights with a visitation for one hour prior to the services at the church. Interment will be at Pilgrim’s Rest Cemetery in Mankato. Mankato Mortuary is assisting the family with arrangements.

Donald was born on May 30, 1934 in Duluth to Alberta Iola Grimm. He attended East Junior High School in Duluth. Don entered the U.S. Army and was later honorably discharged. On January 29, 1955, he married Kathryn C. Hashey. Together they had five children:  Margaret, Donald, James, Lorianne and Edward. They were divorced in 1980 and she later died in 1992. On May 30, 1992, he married Lorraine M. Born at Grace Lutheran Church in Fridley. Don was employed by Honeywell for 19 years as an electroplater in New Brighton and Golden Valley. In 1982, Don worked as an over-the-road truck driver and retired in 1995. Don was a member of Grace Lutheran Church in Fridley and now a member of Berea Ev. Lutheran Church in Inver Grove Heights, He is a former life member of the National Rifle Association and a life member of the In-Fisherman, and an Army veteran. He enjoyed fishing, woodworking, working on his tractors, and was very mechanically inclined.

He was preceded in death by his mother, Alberta; first wife, Kathryn, and many friends.  He was loved by all.

To order memorial trees or send flowers to the family in memory of Donald George Grimm, Sr., please visit our flower store.