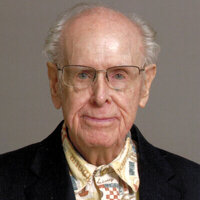 Memorial Mass will be at 10:30 a.m. on Saturday, May 15, 2021 at St. John the Baptist Catholic Church in Mankato. Visitation will be held from 9:00 to 10:30 a.m. prior to the service at the church. Private family interment will take place at Fort Snelling National Cemetery in Minneapolis at a later date. Mankato Mortuary is assisting the family with arrangements.

The service will be livestreamed at: https://www.youtube.com/results?search_query=stjohnsmankato

Donald James, the son of Brandl and Gertrude (Gilles) Leech, was born on October 16, 1927 in Chicago, IL. He graduated from Leo High School. He served honorably in the Navy at Great Lakes Naval Base. He earned a Bachelor of Arts degree in German from the University of St. Thomas in St. Paul. On December 29, 1951, he married Veronica “Ronnie” Svobodny at St. Joseph’s Catholic Church in Minneapolis. Don was previously employed at the Bureau of Labor Statistics in Chicago. Don and Ronnie moved to Green Bay, WI for 16 years, then to Mankato in 1970. While raising 8 children, he worked for the Social Security Administration. He was a member of the Knights of Columbus and NARFE and volunteered for Pages Past Bookstore at the Library. Don had a wonderful sense of humor, was an avid reader, and enjoyed collecting stamps, coins and calendars. Previously, he enjoyed fishing, racquetball, and an occasional game of poker with friends and relatives. He cherished traveling with his wife and spending time with his children and grandchildren.

He was preceded in death by his parents; grandson, Gerald Leech; and siblings, Jerry (Kay) Leech and Beckie (Roy) Schroyer.

To order memorial trees or send flowers to the family in memory of Donald James Leech, please visit our flower store.