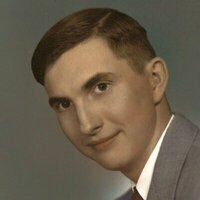 Donald Ray Megaw, age 84, of Mankato, passed away Friday, October 8, 2021 at the Homestead Hospice House in Owatonna. Don’s life was full, and as cancer damaged his lungs, Don prayed Jesus would take him home.

Memorial Mass will be held at 11am, Tuesday, October 12, 2021 at St. John the Baptist Catholic Church in Mankato with visitation one hour prior. Military honors will be performed by the Mankato Area Veterans Memorial Rifle Squad. Burial will be held at St. Joseph’s Catholic Cemetery in Good Thunder. Please share a memory of Donald with his family at www.mankatomortuary.com. Livestreaming will be available at https://www.youtube.com/results?search_query=stjohnsmankato

In lieu of flowers, the family prefers memorials be directed to Vine Adult Community Center.

Donald was born April 17, 1937 in Mankato Hospital to Woodrow and Elnora (Olson) Megaw. After graduating from high school, Don joined the Navy on March 3, 1959 and served during the early Vietnam Era and was exposed to agent orange. From 1959-1963, he was stationed in Hawaii with the US Navy submarine service and was on the only submarine that ever reached Saigon, Vietnam in 1962. He was honorably discharged in March 1965. He married Judy Hughes in July 1968 and they were blessed with a son, Dwayne. Judy passed away in 1995, and Donald was later married to Mary Behnke on February 14, 1997 in Mankato. In addition to being a hardworking farmer, Don was also a certified master truck mechanic, commercial driver, and semi and bus driver. He worked as a mechanic at Chesley Freightliner for 26 years until retirement. He also worked for the City of Mankato for 12 years mowing, city park service, and years of driving city bus at MSU and the handicap bus on Saturdays. Don was the former president of local transit union AFSCME Council 65.

Don gave the best hugs. Dancing to 50s and 60s music was Mary and Don’s favorite night out. Many in the community were named to Team Mary and Don.

It took the region of Mankato’s angels to bring Don to a happy death and a living wake in their home. Special thanks to Mayo Hospice and all their loving workers, Vine Respite Center for the daycare Don loved, and to Richard, their aide sent through the veteran’s administration via International Health Care. The love he showed to a fellow Navy vet and his spouse over the last weeks made in-home hospice possible. Special thanks to Pat Corrow at Blue Earth County Veterans Service! Pat did everything he could to help us. He is such a KIND veteran, too. Don finally felt like his country valued his service, even those 54 days submerged in a submarine. Hats off to Pat and all the VA workers who helped us.

He was preceded in death by his parents; first wife, Judy Megaw; and infant daughter, Christine Megaw; and brother, Ken Megaw.

To order memorial trees or send flowers to the family in memory of Donald Ray Megaw, please visit our flower store.