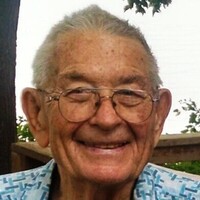 Donald Roger, the son of Nels and Inga (Hilleboe) Ure, was born on October 1, 1929, in Madelia. He graduated from Mankato High School in 1947 where he held the all-around recognition and pole vault record for almost 14 years. Don graduated from the University of Minnesota with his BA in Economics. He was united in marriage to Janice Zettler on January 26, 1952, at Bethlehem Lutheran Church, Mankato.

During the Korean conflict he served in the 979th artillery field battalion in Ansbach, Germany.

Don was the Vice President and Secretary at First Federal Savings and Loan. Don was one of the original founding members of Christ the King Lutheran Church, and a past president of the Mankato Rotary Club. Donald was a family man who enjoyed traveling to Alaska and spending winters in Arizona with Jan for over 30 years. Don enjoyed golfing, hunting, but most of all he loved to fish for walleye pike from his home on Lake Washington. Don was an excellent piano, organ, and keyboards player where he received enjoyment playing for celebrations with family and friends. Don always approached life with zest and positivity. There was always a warm smile on Don’s face when he greeted you.

Donald was preceded in death by his parents; wife, Jan Ure; and brother, John Ure.

To order memorial trees or send flowers to the family in memory of Donald R. Ure, please visit our flower store.