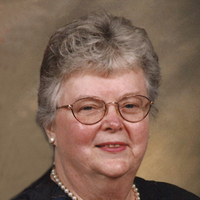 Donna Mae Mann, of Mankato, passed away in the early morning hours of September 17, 2022, at the age of 87 with her family at her side.

Donna was born September 4, 1935, in Belgrade Township, Nicollet County, to Elsie (Plumb) and George Johnson and grew up in Mankato area. After high school, she attended beauty college and later worked at Bachmann’s Music Store where she met Don when he came in to buy a banjo. They married on July 28, 1958.

They lived near Lake Crystal for most of their married life. She was a stay-at-home mom for their three kids, Peggy, Keith, and Royce as well as helping with the farm and various family businesses and always had a large garden.

After the kids were grown, she went to work at Woolworth’s until the Mankato store closed. She also worked at MRCI into her 70's.

Donna and Don enjoyed traveling around the country to visit family as well as trips to Branson, MO, to see the shows. They also spent summers camping in over 200 campgrounds with family.

In addition to gardening, she sewed, crocheted, and baked. She belonged to the quilting group at church and made quilts for all of her children and grandchildren.

To order memorial trees or send flowers to the family in memory of Donna M. Mann, please visit our flower store.