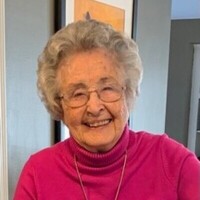 Funeral Mass 10:30 am, Friday, May 20th at St. John the Baptist Catholic Church in Mankato. Burial is in Calvary Cemetery directly after the ceremony. Visitation is one hour before the service at the church. In lieu of flowers, the family is asking for memorials to Daniel J. Coughlan Memorial Scholarship Fund, Schola Foundation, 145 Good Counsel Drive, Mankato, Minnesota, 56001, or Friends of San Lucus, 3459 Washington Drive #207, Eagan, Minnesota, 55122. Mankato Mortuary in charge of arrangements.

Dorothy was born September 12, 1929, to Harold and Johannah (Troseth) Reardon near the Rosebud reservation in South Dakota. She started her education in a one-room schoolhouse and was one of the first women to graduate Phi Beta Kapa from the College of St. Catherine’s in St. Paul. While teaching Spanish, she met Daniel J. Coughlan on a blind date. Six months later they were married on September 21, 1951 in Danvers, Minnesota. Proud of his wife’s academic achievements, Dan always said he married a Phi Beta Kapa to give his kids a 50-50 chance in life.

Some of the many organizations Dorothy was involved with include League of Women Voters, Minnesota Citizens Concerned for Life, Birthright, and River of Life Prayer Community, as well as offering her home for ten years as an temporary foster parent for 112 children.

Dorothy instilled the love of music in all of her children and grandchildren and was never happier than when her entire family sang together. Dorothy and Dan aspired to see as much of the world as possible and their journeys brought them to Asia, Europe, the Middle East and Central and South America. Dorothy’s faith was central to her life. Her spiritual journey was directed by the Holy Spirit and she inspired many through her teachings. She will be remembered as a woman of faith with a gift of generosity, warmth, curiosity, wonder, and awe.

She was preceded in death by her husband of fifty-one years in 2003; and her parents and two siblings.

To order memorial trees or send flowers to the family in memory of Dorothy Agnes Coughlan, please visit our flower store.