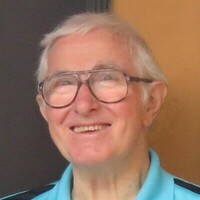 Mass of Christian Burial will be 10:00 a.m., Saturday, September 5, 2020 at St. John the Baptist Catholic Church, Mankato. Visitation will be held from 5-7 p.m., Friday at Mankato Mortuary, 1001 N. Riverfront Drive, Mankato. Interment will be in Calvary Cemetery, Mankato. In lieu of flowers, memorials may be made to any of his favorite charities including Loyola Catholic School, the Salvation Army or the School Sisters of Notre Dame.

Edward was born on July 12th, 1936, in Carrington, North Dakota, the third son of Cornelius and Gertrude (Hofland) Sweere. When Ed was a young child, the family moved back to Minnesota and settled on a farm new New York Mills. He graduated from New York Mills High School in 1954. After graduation he worked on the family farm and used his draftsman and carpentry skills to complete the interior on his parents' new house. In March of 1956 he entered the US Navy and served as a diesel engineer until October of 1957. He returned to the family farm where he worked the land and the dairy business until 1959.

In 1960 he entered the University of Minnesota where he earned an Associate Degree. From 1962 to 1965 he attended Northwestern College of Chiropractic (now known as Northwestern Health Sciences University) and completed the four year course in three years, graduating with honors.

In the spring of 1965 he moved to Mankato and began his chiropractic career. He met his future wife at a party in 1966 and married Catherine Rewitzer on July 22, 1967, at St. Michael's Catholic Church in Gaylord, MN. They were blessed with three sons.

As his chiropractic business expanded and his family grew, it was necessary to relocate. Again his draftsmanship and carpentry skills were utilized in the building of a new home/office complex where he continued to practice in Mankato from 1976 until 2017.

He enjoyed spending time in his workshop with his sons and doing woodworking projects. He enjoyed taking his sons and their friends to local parks, especially the falls area of Minneopa State Park. In summer the family enjoyed traveling to the western states and Canada. Ed had a great interest in sports. In later years he would gladly chat with anyone about the Minnesota Twins, the Vikings, the Timberwolves, the Lynx and the University of Minnesota Golden Gophers.

He was preceded in death by his parents, by his brothers Ted and Harry and sisters-in-law Janice Sweere and Mary Sweere.

He will be remembered for his gentle, easy-going ways and sincere concern for others.

To order memorial trees or send flowers to the family in memory of Edward P. Sweere, please visit our flower store.