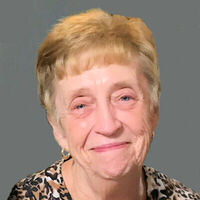 Fayeann Dorn passed away peacefully on August 7, 2021 in North Mankato.

Faye was born November 28, 1946 to Lloyd and Mildred (Anderson) Drews in Waseca, MN. She was confirmed at Grace Lutheran Church of Waseca in 1961 and graduated from Waseca High School in 1964.

In 1969 she married Douglas Dorn of New Richland. Faye was blessed to be a stay-at-home mom for most of her two children’s childhoods. She worked for LaSalle Management Company for many years; first at Gus Johnson Plaza and then as the manager of Colonial Square Apartments. Even though it was a professional role she took care of the residents as though they were her own family. She provided holiday meals and facilitated many other get-togethers for the residents. Despite retiring she couldn’t stand the idea of being idle, so she immediately started working at Palmer Bus Service as an aide for special needs children.

Her hobbies included ceramics, cooking, baking, attending her children’s and grandchildren’s events, and going to Mystic Lake with $20 burning a hole in her pocket. Faye was an active member and volunteer at Hosanna Lutheran Church of Mankato. She also spent a lot of time with the American Legion Post 518 of North Mankato where she made many friends. Faye’s greatest joy in life was bringing joy to others. Her giving spirit will be her legacy.

She was preceded in death by her parents; her brother, Roger/Butch Drews; sisters, Carol Peterson and Vicki Gleason; and brother-in-law, Robert Gleason.

To order memorial trees or send flowers to the family in memory of Fayeann Dorn, please visit our flower store.