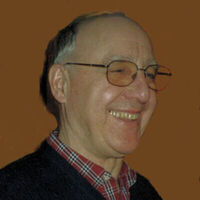 Visitation will be on Sunday, September 19 from 4:00-7:00 p.m. at Mankato Mortuary (1001 N. Riverfront Dr.). Funeral Mass will be held on Monday, September 20 at 11:00 a.m. at SS Peter and Paul Catholic Church with visitation from 10:00-11:00 prior to the service.  Burial will be at Calvary Cemetery. Memorials are preferred to Loyola Catholic Schools or childhood cancer research of your choice.

Gerald was born on January 22, 1936 in Mankato to Cletus and Helen (Reinhart) Hodapp.  He graduated from Mankato High School in 1954.  Jerry served in the Army National Guard from 1958-1964.  On April 27, 1963, Jerry was united in marriage to Arlene Janzen at SS Peter and Paul Catholic Church.  He was a self-made man.  He was a business owner, farmer, and inventor.  Jerry was a very determined man and loved the challenge of fixing anything.  Jerry enjoyed hunting, fishing, and family vacations.  Most important to Jerry was time spent with his family.

To order memorial trees or send flowers to the family in memory of Gerald C. Hodapp, please visit our flower store.