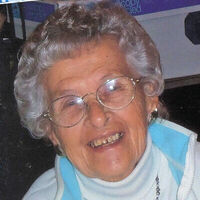 Funeral Mass will be held at 3:00 p.m., Wednesday June 22, 2022, at SS Peter and Paul Catholic Church in Mankato. Visitation will be held from 4 – 7 p.m. Tuesday at Northview – North Mankato Mortuary and continue one hour before the service at the church on Wednesday. Burial will be at Woodland Hills Memorial Park.

Gloria was born January 3, 1922, in Minneapolis to Charles and Katherine (Klick) Warren. She graduated from St. Margaret’s High School and from the University of Minnesota with a degree in nursing. She began her nursing career at HC General Hospital, including working with Sister Kenny and the treatment of polio patients. She enlisted in the US Navy as an ENS Navy Nurse. Gloria was united in marriage to Bert Brosnan on August 25, 1945, at the Great Lake Naval Base near Chicago. They moved back to Mankato, and she worked at St. Joseph Hospital in Mankato as a labor and delivery nurse. Gloria retired in 1992.

She enjoyed playing piano, gardening, drawing, trivia, and travel. Her life was dedicated to love of her family and instilling faith. Gloria was a member of SS Peter and Paul Catholic Church and Birthright of Mankato.

To order memorial trees or send flowers to the family in memory of Gloria Beatrice Brosnan, please visit our flower store.