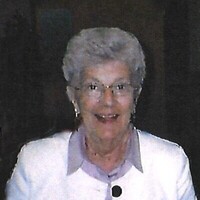 Gloria Ensign age 92 of Mankato died October 31, 2020 at Hillcrest Health Care Center. An outdoor burial service will be held 10 a.m., Tuesday, December 1, 2020 at St. Anne’s Catholic Cemetery in Wabasso. You may sign the guestbook and leave a condolence at www.mankatomortuary.com.

Gloria Rose was born July 20, 1928 in Wabasso to Wenzel and Margaret (Rothmeier) Johanneck. She graduated from Wabasso High School in 1946. Gloria married Wallace Schoening on April 25, 1955. Wallace died on August 23 1957. When Gloria first moved to Mankato, she was a cosmetician at Sward Kemp drug store. She was later employed for over twelve years with Hubbard Milling Company as a lab technician in quality control.

On April 30, 1970, Gloria was united in marriage to Frederick “Fritz” Joseph Ensign and continued to make their home in Mankato and later on Lake Washington. Gloria also started and ran her own ceramic shop “Clay Pot Ceramics” on South Front Street in Mankato. In 1982, Gloria closed her business and worked at K-Mart until her retirement in 1991.

During the summer months, Gloria enjoyed fishing and gardening, and during the winter she liked to ice skate and shop. She was a great cook and a talented ceramic artist. She cherished the times she and Fritz would sit on the deck at the cabin visiting with friends and family and enjoyed watching the ducks swim by.

Gloria will be sadly missed by her loving husband, Fritz Ensign of Mankato and her many nieces, nephews, and their families. Gloria was preceded in death by her parents; first husband, Wallace Schoening; brother, Jerome Johanneck; sisters, Francis Gadow, Doris Kiley, Marie Allex, Mildred Bellig, and Margaret Tampa.

To order memorial trees or send flowers to the family in memory of Gloria (Johanneck) Ensign, please visit our flower store.