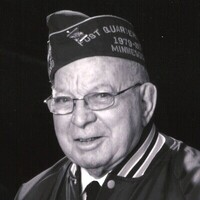 Private family services will be held at Kasota Hill Cemetery in Kasota. Olson – Tichenor Funeral Home is assisting the family with arrangements.

Gordon Arthur, the son of Roy Carl and Myrtle Ellen (Sell) Maue, was born on June 14, 1929 in Monticello. He graduated from Monticello High School. Gordon served in the U.S. Army from 1949 – 1952 during the Korean War. He joined the Peace Corps from 1962 – 1963. Gordon was previously employed at Western Union Telegraph before he continued his education at Dunwoody College for carpentry. In 1977, he moved to Mapleton and bought the Mapleton Boot Shop and met his significant other, Marion Stith in 1980. They were together until she preceded him in death in 2013. Gordon was a member of the VFW Post 5338, the American Legion, Mankato Sertoma Club, and the Victory Drive Tree Restoration. He enjoyed traveling, wood carving, gardening, playing cards, and spending time with his family and friends.

To order memorial trees or send flowers to the family in memory of Gordon "Pete" Arthur Maue, please visit our flower store.