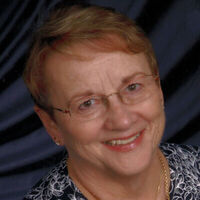 Gwen was born January 19, 1942 to Rev. Herbert F.F. and Myrtle (Ehlert) Muenkel in Wabasha, Minnesota. She was baptized at Our Redeemer Lutheran Church in Wabasha in 1942. Gwen attended elementary school in Dexter, Minnesota, from first grade until December 1950 when the family moved to Zumbrota, Minnesota. She attended Zumbrota Elementary School through grade four, then fifth through eighth grades at Grace Lutheran School in rural Goodhue, Minnesota. Gwen was confirmed at Christ Lutheran Church, Zumbrota, in May of 1956. She began high school at Dr. Martin Luther High School, then part of Dr. Martin Luther College in New Ulm, Minnesota, graduating in 1960. She attended Dr. Martin Luther College until December of 1961 when she left college to work as a nanny in Minneapolis for one year.

The fall of 1962, Gwen enrolled at Mankato State College to pursue a degree in music. She had met Gerald Tjernagel in high school, and they married on September 14, 1963 at Christ Lutheran Church in Zumbrota with her father, Pastor Muenkel officiating. Gwen and Jerry made their first home in an apartment in Mankato while Jerry finished his degree in Medical Technology. In 1964, they moved to Fergus Falls, Minnesota, where Jerry began his career as a Medical Technologist at Lake Region Hospital. Gwen worked for a music store, giving piano and organ lessons and as a salesperson. Jerry was called to serve in the US Army Reserves and left for training at Ft. Lewis, Washington, on February 2, 1967. Their daughter, Elizabeth (Beth), was born on February 4, 1967. Gwen and Baby Beth lived at the parsonage in Zumbrota with Herbert and Myrtle and then with Jerry’s parents, Sigurd and Gertrude Tjernagel, in New Ulm - equal time for each set of grandparents.

When Jerry returned from Army training six months later, the family moved to Fergus Falls, Minnesota. In 1968, Jerry accepted a position in the laboratory at Immanuel-St. Joseph Hospital in Mankato and the family moved once again. Daughter, Rebecca (Becky), was born on December 31, 1968. In October of 1970 the Tjernagel family bought their first home in North Mankato at 620 Page Ave. Son, Andrew, arrived July 1, 1971. It was here that they enjoyed family life watching the children grow up and allowing Gwen to be a stay-at-home mom. Eventually the children grew up and went off to school, first at Mt. Olive Lutheran Elementary and then at St. Mark Lutheran School when that opened in 1977. Beth was enrolled in Martin Lutheran Prep School in Prairie du Chien, Wisconsin for high school; Becky attended Mankato West High School, and Andrew attended Minnesota Valley Lutheran High School near New Ulm.

When the children were all in school full-time, Gwen worked a number of years for Osco Drug in Mankato as a cosmetician; then worked for the music store as a salesperson and piano teacher. Gwen then went back to school at DMLC and finished her Bachelor of Science degree in Education in 1983. She worked for several years at the North Mankato Public Library. In 1986, Gwen received a call from Dr. Martin Luther College in New Ulm to teach piano, voice, and several courses in the Music Department. She also became the handbell choir director when the director went on sabbatical. She served on the faculty in that capacity until 1999. After leaving the teaching ministry, Gwen was able to accompany Jerry on his business trips to all 50 states and overseas to Italy, England, and France. For 56 years, Gwen served St. Mark Lutheran Church in Mankato as an organist, choir director, handbell director, and secretary. Gwen was a gifted pianist, organist, and flutist in her own right and was often found at her piano practicing or entertaining.

Gwen loved being with family more than anything else. She always had an open heart, an open door, coffee brewing, and a full cookie jar! She and Jerry enjoyed traveling, visiting family and friends all over the country, and spending the winter months in Bonita Springs, Florida.

Funeral service will be held at 1:00 p.m., Sunday, August 29, 2021 at St. Mark Lutheran Church in Mankato with visitation one hour prior to the service at the church. The family prefers memorials be directed to either Risen Savior Lutheran School in Mankato, MN or Minnesota Valley Lutheran High School in New Ulm, MN.

To order memorial trees or send flowers to the family in memory of Gwendolyn Ann Tjernagel, please visit our flower store.