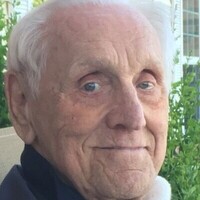 Harvey Peter Suedbeck passed away on Wednesday, May 27, 2020 at Oak Terrace Assisted Living of North Mankato, at 93 years old.

Harv was born in Adrian, MN son of Edward and Margaret (Schutz) Suedbeck where he grew up on the family farm with his four brothers and a sister. The family moved to Slayton, MN where Harv graduated from Slayton High School in 1944. Following his service in the US Army Air Corps, he became the Assistant Murray County Highway Engineer. Harv was united in marriage to Viola Becker on June 26, 1954. Harv and Vi moved to New Ulm, MN in 1960 where he became the Brown County Highway Engineer and raised their family. Harv was an amazing, loving husband and father.  A final move to North Mankato, MN came next, where he was the District State Aid Engineer/MNDOT until his retirement.

Harv enjoyed his sports. He played on the Slayton semi-pro baseball team as a young man. The Twins or Vikings games were always on the radio or TV. Harv and Vi spent 20 years as “snowbirds” in Palm Springs, CA. They belonged to two desert hiking clubs and enjoyed sharing the trails with visiting family. Harv enjoyed playing golf and was a volunteer marshal for the PGA, LPGA and celebrity golf tournaments.

The family will have a private memorial mass and interment due to current circumstances. Mankato Mortuary is assisting the family with arrangements. Memorials to Alzheimer’s Association. The family wants to extend their heartfelt gratitude to the staff at Oak Terrace for their loving care.

To order memorial trees or send flowers to the family in memory of Harvey Peter Suedbeck, please visit our flower store.