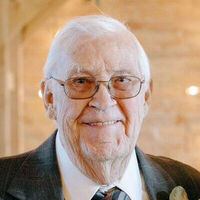 A private memorial service will be held at a later date. Northview-North Mankato Mortuary is assisting the family.

Herb was born at home May 22, 1931 to Idris and Mary (Evans) Davis in Lake Crystal. He graduated from Lake Crystal High School in 1949, second in his class. He continued his education at Mankato Teachers College receiving a degree in accounting. In 1952, he was drafted into the US Army during the Korean War. He was honorably discharged in 1954 and in March of that year, Herb married his high school sweetheart, Loretta Ash. Together, they raised four children, Deb, Doug, Lorna, and Randy.

Herb worked at Railway Motors in Fairmont until he returned to the family farm where he farmed until his retirement in 1996. After Loretta’s death in 1993, Herb married Betty Kline in 1994.

Herb was a dedicated farmer his entire life. His hobbies and interests include wintering in Texas, turkey and deer hunting, and polka dancing. He was a member of the Cambria American Legion, Eagles Club of Mankato, and Ducks Unlimited.

The family would like to thank Crystal Seasons and Mayo Hospice for their excellent care of Herb.

To order memorial trees or send flowers to the family in memory of Herbert Davis, please visit our flower store.