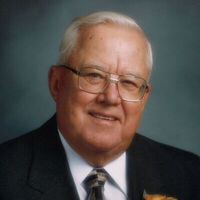 A private family service will be held at a later date. Burial will be in the family plot in Stillwater, Minnesota. The family prefers memorials be given to any veteran’s organization. Mankato Mortuary is assisting the family.

Ivan was born on April 25, 1927 in Stillwater, Minnesota to Ivan Sr. and Evelyn (Berquist) Roettger. Upon graduation from high school in 1945, he was drafted into the U.S. Army and served in Germany until late 1948.  After attending River Falls College and his marriage to Betty Lou Sontag, he was recalled into the army for the Korean War in 1950 while studying at Gustavus Adolphus College.  He finally finished his business degree there in 1954.  Viewing WWII as a teenager and his lengthy non-combat military service, shaped his world view all his life.

Ivan’s adult career years were spent with the Owatonna Tool Company as a Facility Engineering Supervisor. He and his wife were active in church and community affairs there.  Much time was happily spent with family, friends and neighbors at a cabin and home of almost 50 years on Lake Francis, Elysian.  Late in life, he and his wife lived at Real Life Cooperative in Mankato where he once again was an active volunteer in his tenth decade of life.  His 2011 Honor Flight to Washington, D.C. was a source of pride and distinct pleasure.

Ivan is survived by two daughters, Sandra (John) Racek of Hopkins and Susan (Rick) Fleming of Mankato; as well as 3 grandchildren, Julie (Matt) Leibel, Ann Racek and Mark (Bridget) Fleming; 2 great-grandchildren, Lucy and Calvin Leibel; along with 2 brothers, Jerry (Ann) and Roger (Judy); and nieces and nephews.  He was preceded in death by his parents; and one sister, Joan Rodgers.

To order memorial trees or send flowers to the family in memory of Ivan Roettger, please visit our flower store.