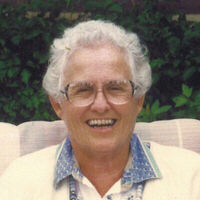 Anne (Connor) Frederick, 90, of North Mankato, formerly of Madison Lake, died Sept. 4, 2022 at Mayo Clinic Hospital, St. Marys Campus in Rochester due to injuries she received from a fall.

Anne was born March 19, 1932 to William and Josephine (Duane) Connor in Mankato. She attended Marysburg Country School and Good Counsel Academy in Mankato. She worked at Northwestern Bell as a long-distance telephone operator and later at Frederick’s Cafe in Mankato. She became a homemaker once she began to have children.

Anne married Robert L. Frederick at Immaculate Conception Church of Marysburg on May 21, 1953. Together they raised 7 children in Mankato.

In her early years, Anne collected stamps and coins. She was known for her beautiful handwriting and her passion for reading. Anne and Bob enjoyed traveling to many interesting places in the world, dancing, bicycling around North Mankato and eating out. In her later years, Anne greatly enjoyed participating in the Ladies Auxiliary at Good Counsel, volunteering at Holy Rosary Church, assisting at elections and playing cards with friends. She loved her family, was proud of her Irish roots and enjoyed talking about politics and recent events.

Anne was preceded in death by her parents; husband, Robert; her son, Dean at age 2; her brothers, Duane and John; her sisters, Eileen Eustice and Kathleen Mans; her brothers-in-law, Herb Eustice and Myron Mans; sister-in-law, Donna Connor; and her daughter-in-law, Nancy Frederick.

To order memorial trees or send flowers to the family in memory of J. Anne Frederick, please visit our flower store.