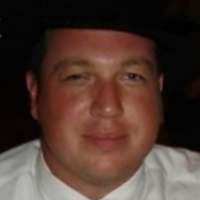 A Sharing of Memories will be at 1:30 p.m., with visitation starting at 1 p.m., and continuing after the sharing of memories, Sunday, January 9, 2022 at Morson-Ario-Strand VFW-Post 950 in Mankato. Please bring a memory to share about Jack. We also ask that everyone wears a mask. A Celebration of Life will follow from 4-9 pm at the What’s Up Lounge in Mankato. In honor of Jack please feel free to wear his favorite color, black, or your favorite MN sports apparel.

Jack Eric was born, October 29, 1975 to Jack and Jane (Thompson) Rupert, Sr. in Sedalia, MO.  He graduated from New Ulm High School in 1994. On June 14, 2003 he married Stacey Hubbard and together they had two children. Jack worked for Schmidt’s Siding and Windows. In 2009 he graduated from Minnesota State University, Mankato with a degree in history and went on to obtain his Juris Doctor from Hamline University School of Law in 2013. Jack then worked for the City of Minneapolis as an Enterprise Information Management Analyst. Growing up, Jack was active in the Boy Scouts and enjoyed playing football. He was a lifelong Minnesota sports fan, enjoyed attending concerts, cooking, and most importantly he loved spending time with his children.

Jack was preceded in death by his grandparents, Harold and Gen Thompson and Wilfred and Dorothy Rupert; and his beloved dog, Tori.

For those wishing to make a memorial contribution, a GoFundMe has been set up for the family to help with living expenses.

To order memorial trees or send flowers to the family in memory of Jack "Eric" "Rupe" Rupert, Jr., please visit our flower store.