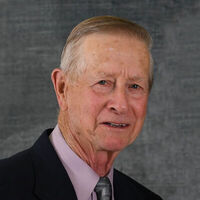 Memorial service will be held at 11am, Monday, August 2, 2021 at Calvary Lutheran Church in Rapidan with visitation one hour prior. Please share a memory of Jim, view his video tribute, and watch his service livestreamed at www.mankatomortuary.com.

Jim was born September 30, 1935 in Kingsford, Michigan to Merrill and Esther (Wirtz) Marble. He was raised in Wisconsin and graduated from Florence High School in 1953. Jim enlisted in the United States Air Force on March 27, 1956 and served as an airplane mechanic until being honorably discharged on March 26, 1962. While visiting a friend in Nebraska, Jim was introduced to Carolyn Durflinger. They were united in marriage on November 9, 1957 in Hebron, Nebraska. They relocated to Mankato in 1961. He worked as a car mechanic and later retired from Dotson Foundry as a maintenance technician.

Jim enjoyed woodworking, socializing with friends over a meal, dancing with Carolyn, and cheering on the Green Bay Packers. He was an active volunteer and supported the Eagles, Kiwanis Club, Mankato Chamber of Commerce, and Salvation Army red kettles. Jim was a lifelong member and past president of the Kato Cycle Club. He and Carolyn were members of Calvary Lutheran Church in Rapidan, and Jim was active with the choir. Jim had a great sense of humor and loved spending time with his family.

To order memorial trees or send flowers to the family in memory of James "Jim" Randolph Marble, please visit our flower store.