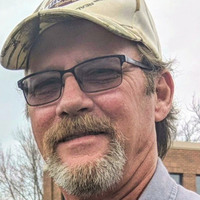 Jerome “Jerry” Jay Mundt, 62, of Madison Lake, passed away peacefully at his home surrounded by his family on Thursday, October 20, 2022 after a short battle with pancreatic cancer.

Jerry was born May 7, 1960 in Webster, South Dakota to John Mundt, Jr. and Arlene (Phelps) Mundt, the youngest of six children. The family moved to Lake Crystal, MN in 1961 where Jerry attended school. As a young man, Jerry began working with his father and brother, Robert, as part of a maintenance crew on area grain elevators for GTA (later Harvest States). He enjoyed working outdoors and worked a few years as a tree trimmer before starting a long career as a commercial roofer/foreman. He was a member of the Roofers Local 96 union. He began his career at Schwickert’s in Mankato and then began working in the Twin Cities area where he retired from roofing at age 59 ½ from John A Dalsin & Sons. Jerry continued to work several different part-time jobs until August of 2022 when he was diagnosed with pancreatic cancer.

Jerry was united in marriage to Jodi Thompson in St. James, MN on October 23, 1982.   Together, they were blessed with 3 children. The family resided in Lake Crystal until 2001 when they moved to the lake near Madison Lake, MN. Jerry enjoyed fishing, boating, collecting old beer signs, and his classic cars. He enjoyed his yearly salmon fishing trips on Lake Michigan visiting his sister/brother-in-laws home with his nephew, Kenny. He loved spending time with his family at the lake, playing around wrestling with his grandchildren, and teaching them how to fish. Jerry was a hard-working, fun-loving man who was ready to give a helping hand to others with any project they had. He was a devoted husband, father, grandfather, and friend who will be greatly missed by many whose lives he touched.

To order memorial trees or send flowers to the family in memory of Jerome "Jerry" Jay Mundt, please visit our flower store.