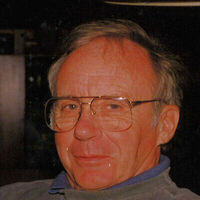 John Patrick Scheidel of Mankato passed away peacefully on January 25 with his family by his side at Pathstone Living.

Born on May 15, 1937, in Mankato Minnesota, John graduated Loyola High School in 1955 where he made many lifelong friends. John attended Notre Dame University and graduated from the University of Minnesota Dental School in 1962. He served in the US Air Force from 1962-1964. John started his dental practice in Mankato in 1964. Flying airplanes was one of his passions and he was hired by Northwest Airlines as a pilot in1967.

John was a lifelong Catholic and his faith provided a strong foundation in his life and relationships. John married Shirley Brenner of Mankato and had two children, Ben and Anastasia. John and Shirley enjoyed 60 years of marriage together and had many adventures traveling. John especially loved spending time at the lake as he was an avid sailor and boater and spent many hours on the water no matter where he was. He loved to spend his free time working on cars and boats. John regularly went to coffee and lunch with friends and cherished the conversations and camaraderie, both in town and also in the cockpit. He was outgoing and a wonderful conversationalist who was never afraid to speak his mind. After he retired, he took up reading to the blind, delivered hot meals on wheels, and was a regular driver at VINE.

John is survived by his wife Shirley, two children Ben Scheidel (Anja Scheidel), and Anastasia Carter (Brandon Carter), and brother Al Scheidel, grandchildren Helena, Bozena and Eli Scheidel, and Leo and Mary Carter; and many nieces and nephews who were all special to him. He was pre-deceased by his parents AG and Helen Scheidel, stepmother Madeline Scheidel, and sister Jean Plat.

A private mass will be held at St. Joseph the Worker Catholic Church. In lieu of flowers, memorials can be made in John’s name to the School Sisters of Notre Dame, VINE, Loyola High School or the organization of your choice.

The family is very grateful for the care and support given to John by the staff of Pathstone Living.

To order memorial trees or send flowers to the family in memory of John Patrick Scheidel, please visit our flower store.