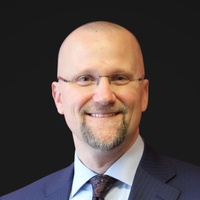 He was born on August 18, 1966 to John “Jack” and Judith (Bodien) Zierdt. Jonathan attended kindergarten through grade 12 in Spring Valley, Minnesota, graduating Valedictorian in 1985. Jonathan was an active member in Boy Scouts, earning rank of Eagle Scout. He was inducted as a Vigil Honor member within the Order of the Arrow, Scouting’s National Honor Society, and served one term as Chief of the Blue Ox Lodge.  Jonathan was spiritually guided and confirmed by the Faith United Methodist Church, along with being a highly engaged Youth Fellowship member.

Following high school, he attended the University of Wisconsin-River Falls, graduating with highest academic honors in 1990 with a Bachelor of Science degree in Biology and Secondary Education with a minor in Coaching. Upon graduation, Jonathan was hired by Gamehaven Council of the Boy Scouts of America to serve as District Executive and Senior District Executive for Dodge and Steele counties (1990-1995). In 1995, Jonathan was asked to lead the United Way of Steele County as its Executive Director, followed by leading the Owatonna Chamber of Commerce as its President (1997-2000).

While residing in Owatonna, Minnesota from 1990-2004, Jonathan remained active in the community, dedicating time and leadership to the Owatonna Rotary Club, along with co-leading the creation of a second club. Jonathan attended, as a delegate member, two international conventions, and served in executive officer roles.

Throughout Jonathan’s 5+ year journey of navigating prostate and kidney cancer, he became a beacon of strength, positivity and perseverance. Openly sharing his cancer journey and faith, Jonathan was grateful for the compassion the community showed he and his wife of twenty-eight years, Ginger. In 2017, the Zierdts, along with a guiding coalition of engaged community leaders, established the Jonathan Zierdt Cancer Fund to build community cancer awareness and support.

In the Mankato community, Jonathan served as Board President of the Mankato Family YMCA and the Board Chair of the Greater Mankato Area United Way. He also Co-Chaired the Community Celebrations Committee for Minnesota State University, Mankato’s Sesquicentennial in 2018. Jonathan had a kindred relationship to the pastoral staff and congregation of Hosanna Lutheran Church, and in 2018 realized a life-dream to travel to Israel to visit the Holy Land with a delegation of fellow disciples.

In 2017, Jonathan rekindled his love for photography, a passion first ignited in high school, and created J. Gordon Studios. It was his delight to shoot environmental photos in Iceland, Israel, and five national parks during the last two years of his life.

Jonathan was preceded in death by his father-in-law, Glen VanGrevenhof.

Family, friends, and others whose lives Jonathan touched are invited to the visitation from 1-4pm, Sunday, March 31, 2019 at Hosanna Lutheran Church, 105 Hosanna Drive, Mankato, Minnesota.  Memorial service will be held at 11am, Monday, April 1, 2019 at Hosanna Lutheran Church with visitation one hour prior. Following the service, lunch will be served along with time for fellowship and reminiscence for Jonathan G. Zierdt. Please share a memory of Jonathan and view his video tribute when it is available at www.mankatomortuary.com.

Memorials may be made in Jonathan’s name to the Jonathan Zierdt Cancer Fund, a donor-advised fund of the Mankato Area Foundation.

I will make the lives of people and the communities in which they live better.

Whatever you do, work at it with all your heart, as though you were working for the Lord and not for people. (Colossians 3:23).

To order memorial trees or send flowers to the family in memory of Jonathan Gordon Zierdt, please visit our flower store.