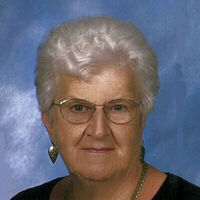 Funeral Mass will be held on Saturday, November 20 at 11:00 a.m. at Holy Rosary Catholic Church in North Mankato.  Visitation will be Friday, November 19 from 4:00-7:00 p.m. at Northview-North Mankato Mortuary and will continue one hour prior to the service at church.  Burial will be at Calvary Cemetery.

LaVaughn was born on November 3, 1924 in Madelia, MN to George and Mary (Yaeger) Dusell.  LaVaughn graduated from Madelia High School in 1943.  She moved to Mankato where she worked at Immanuel Hospital, Tent and Awning, and Lake Fish Canning.  She worked at Automatic Electric from 1945-1948 and worked at the Mankato Area Vocational Technical Institute from 1969-1987.  LaVaughn was united in marriage to Raymond Drummer on April 17, 1948.  They moved to Madelia in March 1949 to farm with her dad.  Ray and LaVaughn bought their family farm in North Mankato in 1950.  LaVaughn loved baking, canning, crafting, playing pfeffer, and circle meetings.  You could always find home cooked meals and fresh baked goodies in LaVaughn’s kitchen.

To order memorial trees or send flowers to the family in memory of LaVaughn Darlene Drummer, please visit our flower store.