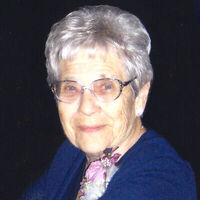 LaVerne Agnes was born November 7, 1925 to Clarence and Anna (Johnson) Borneke in Mankato, Minnesota. She went to be with her Lord and Savior on January 9, 2022.  LaVerne was baptized January 17, 1926 and confirmed on July 2, 1939, both at Trinity EV. Lutheran Church in Madison Lake, Minnesota. She graduated from St. Clair High School on June 1, 1944.  On August 24, 1948, she married Kenneth William Freitag in Eagle Lake, Minnesota at the Salem Lutheran Church. Together they farmed in McPherson Township and raised 3 children: Steven, Thomas and Zandra. She also cared for Terry Zirbes (Rutt) for a year while her family was traveling on the road for work.

Besides working of the farm, she worked a seasonal job for Birds Eye in Waseca. She also worked part time at the St. Clair Diner, Boswell’s Greenhouse, Shopko in Mankato, which she retired from in 1995, and then did home pasting for Carlson Craft.

In the spring of 2014, she moved into AmberField apartments in St. Clair after Kenneth’s passing in 2012. She moved to Laurels Edge Assisted Living in Mankato in 2019.  After surviving Covid 19 in January of 2021, she became a resident of Laurels Peak Rehabilitation Center.

LaVerne was a member of St. John’s Evangelical Lutheran Church in St. Clair and served on the Ladies Aid. She also served as an American Legion Delegate in 1953.

Two of LaVerne’s best friends were her sewing machine and her crocheting hooks.  She made a variety of many things. Some include: Barbie doll cloths, Cabbage Patch dolls, pound puppies, afghans, quilts, baptismal gowns, and of course her Scrubbies. Her and Kenny also enjoyed gardening, dancing, playing cards, puzzles, bird watching, and that occasional trip to the casino…..a major distribution center for her Scrubbies. LaVerne’s green thumb kept the house supplied with many plants and flowers.

LaVerne is survived by her children, Steven (Lisa) Freitag of Elk River, Thomas (Luann) Freitag of Janesville, and Zandra Jindra of Hutchinson; sister-in-law, Donna (James) Borneke of Eagle Lake; 12 grandchildren; 22 great grandchildren; many nieces and nephews and other relatives and friends.

She was preceded in death by her parents; husband, Kenneth; brothers, James and Robert; sisters-in-law, Joyce Borneke and Ordella Scholljegerdes.

To order memorial trees or send flowers to the family in memory of LaVerne Agnes Freitag, please visit our flower store.