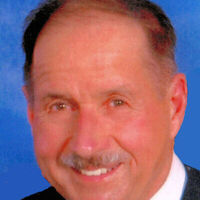 Lawrence Bernard Landsteiner, 79, of Minnesota Lake, passed away on July 24, 2021 in Rochester, MN from a massive brain hemorrhage.

Memorial Service will be held on Thursday, July 29 at 11:00 a.m. at St. Teresa Catholic Church in Mapleton.  Visitation will be Wednesday, July 28 from 3:00-7:00 p.m. at the church and will continue one hour prior to the service.  Burial will be at St. John the Baptist Catholic Cemetery in Minnesota Lake.  Olson-Tichenor Funeral Home is assisting with arrangements.

Lawrence was born on December 19, 1941 at home on the farm in Danville Township to Bernard and Dorothy (Staloch) Landsteiner.  He attended country school through 8th grade and graduated from Mapleton High School in 1959.  He entered the Minnesota National Guard for 3 ½ years after graduation, Lawrence then began farming with his father and then his brothers and nephews until he retired in 2007.  He always helped with the farming for the remainder of his life.  He enjoyed traveling with the Pro Farmer Midwest Crop Tour and was presented a Master Crop Scout award in August 2013.  He also served on the Festag Committee of Minnesota Lake chairing the little kids pedal pull for almost 20 years.  On July 20, 1965, Lawrence was united in marriage to Joan Woitas at St. John the Baptist Catholic Church in Minnesota Lake.  Together they made their home on the farm for 56 years and raised their three children.  He loved all aspects of farming, gardening, and feeding his cats.

To order memorial trees or send flowers to the family in memory of Lawrence Bernard Landsteiner, please visit our flower store.