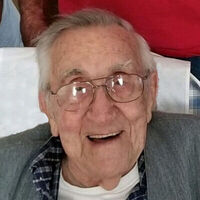 Funeral Service will be 1:00p.m., Thursday, February 18, 2021 at Northview-North Mankato Mortuary, 2060 Commerce Dr., in North Mankato. Visitation will be from 11:00a.m. until the time of the service. Burial will take place at Calvary Cemetery in Madison Lake, Minnesota.

Lee was the son of Ralph W. and Lydia M. Jacobs and was born at Precept Precinct, Furnas Co. Nebraska November 1, 1931.  With his parents, he moved to Minnesota in 1936. Lee attended the Madison Lake Public School and graduated from Mankato High School and focused his study at Vocational School.  Lee served in the U.S. Navy, from 1950-1954 aboard the U.S.S. Coral Sea, an aircraft carrier.  He was a Machinist Mate II on the ship.  While serving in the Navy Lee met the love of his life, Dorothy Lefrancois, on a blind date. They were married on February 6, 1954 in Fairhaven, Massachusetts.  When military services ended Lee and Dot returned to Madison Lake.   They were married for more than 60 years.  Lee’s work experience included Wirig Furniture, Meyer & Sons, Continental Can Co., and Crown Cork and Seal.  He was a can line maintainer and manager.  Lee also served on the Madison Lake City Council and spent more than twenty years as a Volunteer Fire Fighter for the Madison Lake area.

He was preceded in death by his parents; wife, Dot; great-grandson, Knox Worrell; and brother-in-law, Roger Schaub.

To order memorial trees or send flowers to the family in memory of Leland Jacobs, please visit our flower store.