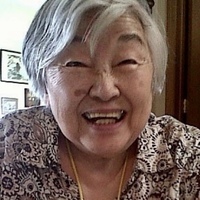 Lena Dunn Lo passed away on March 23, 2021 in Mankato, MN. Lena was born in Shanghai, China on October 29, 1922 to Frank B. Dunn and Wen-chao (Chang) Dunn in a family of six girls and one boy. She was educated at the McTyeire School (Methodist) in Shanghai and was subsequently admitted to Hamline University in the United States. However, the Japanese invasion of China prevented her travel and she enrolled instead at Saint John’s University in Shanghai. Many American teachers were imprisoned in China at that time which resulted in Lena’s being asked, as an undergraduate, to teach English to 7th and 8th grade students.

Lena married Irving Yucheng Lo whom she met at St. John’s University. They were able to emigrate to the United States in 1942 when they were accepted to graduate schools. Lena earned a Master’s Degree in English from Boston University and Irving earned a Ph. D. in English from the University of Wisconsin-Madison. Their plans to return to China to teach English were thwarted by the Communist takeover of the Chinese government.

Both Irving and Lena taught English at Stillman College in Tuscaloosa, Alabama. Later they moved to Michigan, and Lena began working at Upjohn Pharmaceutical Company where she rose from the rank of secretary to Medical Writer. They next moved to Iowa, and then to Bloomington, Indiana where Lena became assistant editor for the American Sociological Review.

After Irving’s retirement from Indiana University-Bloomington, they moved to North Carolina where Irving passed away in 2006. Lena then moved to California where she lived for two years before joining her son in Minnesota in 2008.

A celebration of Lena’s life will be held at Trinity Lutheran Church in Saint Peter at 11:00 AM on April 6. In lieu of flowers, we ask that you give to your favorite charity. St. Peter Funeral Home is assisting the family with arrangements.

To order memorial trees or send flowers to the family in memory of Lena Dunn Lo, please visit our flower store.