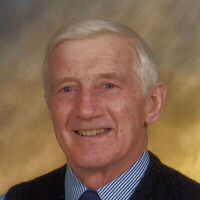 A Private Funeral Mass will be held at St. Andrew Catholic Church in Elysian. A public visitation will be held from 2 – 5 p.m., Sunday at Northview – North Mankato Mortuary, 2060 Commerce Drive, North Mankato. Burial will be held at Assumption Cemetery, St. Cloud, on Tuesday at 11:00 a.m. In lieu of flowers, memorials are preferred to Loyola Catholic Schools in Mankato or St. Mary’s Catholic School in Sleepy Eye. Service will be livestreamed at www.mankatomortuary.com

Leo was born November 5, 1935, to Alfred and Loretta (Feddema) Bromenschenkel in St. Cloud, Minnesota. He taught school in Pine Island, Delevan, Winnebago, and Blue Earth public schools. Leo was united in marriage to Gail Brandel Huiras on June 11, 1988, at St. Mary’s Catholic Church, Sleepy Eye. Leo spoke fluent German and was an escort for travelers from Germany in the United States and accompanied students and travelers to Europe. He later became a proofreader at BIC Graphic in Sleepy Eye for 20 years.

Leo was preceded in death by his parents; son, Joseph Huiras; brothers, Roger, Kenneth, and Victor; sisters, Edwina and Betty.

To order memorial trees or send flowers to the family in memory of Leo Norbert Bromenschenkel, please visit our flower store.