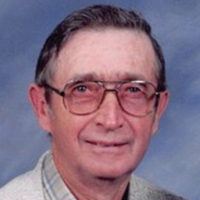 A Celebration of Lloyd’s Life will be held at 11:00 a.m., August 1, 2022, at Northview – North Mankato Mortuary, 2060 Commerce Drive, North Mankato. Visitation will be from 9 a.m., until the time of service Monday. Interment will be in Minneopa Cemetery, rural Mankato.

Lloyd was born July 26, 1929, to Ray and Dorothy (Anderson) Davis in Mankato. He attended Judson Consolidated School for 8 years and later in life served on the school board of this fine school. He went on to graduate from Nicollet High School in 1947. It was here that he met many new and lasting friends. He played football and basketball and always enjoyed sports of every kind.

Lloyd was baptized and brought up in the little church in Judson where he served on the church board for several years.

He married Elsie D. Schroeder, the love of his life for 66 years, at Bethany Lutheran Church in Judson, on March 24, 1956. To this marriage two sons were born, David and Daryl. These 2 boys were his best friends. David died unexpectedly in 1996. To these two sons, four grandchildren were born, Jennifer, Melissa, Evan, and Bryan. He taught these grandchildren how to drive long before they were of age, much to the dismay of their mothers.

He loved his family, a good joke, farming and always strived to get a better yield next year. About the only things Lloyd hated were big clambakes, as he called them, neckties, weeds and thistles.

Lloyd served in the U.S. Army for 2 years during the Korean War and then the National Guard for 2 more years. There he met many friends who are still his buddies today. Lloyd is a member of Hosanna Lutheran Church where friends are easy to find.

Lloyd’s family would like to thank Mayo Hospice – South Team and a special thank you to neighbors, friends, and family for their kindness and support shown to Lloyd.

The live stream link below is a complimentary service provided by Mankato Area Funeral Homes. Unforeseen technical, internet, facility, and/or acoustical circumstances may produce a diminished end product. Please note, if the live stream does not appear, we are attempting to record and publish the service for later viewing.

To order memorial trees or send flowers to the family in memory of Lloyd R. Davis, please visit our flower store.