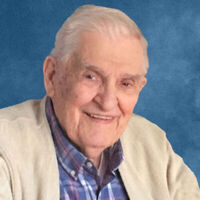 Loren was born April 11, 1923 to Harry and Esther (Dreyer) Schmitt in Hampton, Iowa.

When he was 10 years old, his mother and her identical twin sister Fleta died.  Their children, Loren and Merna, were then raised by their grandmother, Caroline (Witthoft) Dreyer in rural Hampton.  Loren’s and Merna’s fathers (Harry and August Schmitt) were also brothers.  Loren often said Merna was like his sister.

Loren was in high school when he returned to the family farm and his father married Vera Johnson.  Many years later and before Vera died in 1985, she adopted Loren.

Loren’s interest in sports began in high school when he played football and basketball.  After graduating from Hampton High School in 1941 he went to Fred Stein’s Welding School in Hampton.  He then worked in Albert City, IA before finding a job in Cedar Rapids, IA where he met Pauline Landis.

Loren married Helen Wilhelm on February 10, 1968 in New York.  They moved to Minnesota where Loren worked for Honeywell.  When Loren retired from Honeywell in 1987, he and Helen moved to Hot Springs Village, AR.

After Helen’s death in 1989 Loren met Rae Read.  They were married October 26, 1991 in Hot Springs Village.  Following Rae’s death in 2017 Loren moved to New Perspective in Mankato to be nearer family.

Loren worked hard all his life ~ first on the farm and then as a machinist and engineering aide in various factories in Iowa, New York, and Minnesota.  He understood how things work and could fix anything.  He loved to go fishing, especially with his Honeywell buddies on opener weekends.  Loren was proud to be a World War 2 veteran.

Loren was preceded in death by his parents, his wives Rae and Helen, his former wife Pauline, and his adopted sister Betty Pandil.

A service and burial will take place in Hampton in the spring.

The family is grateful for all the care and help Loren received from St. Croix Hospice and the staff at New Perspective in Mankato.

To order memorial trees or send flowers to the family in memory of Loren H. Schmitt, please visit our flower store.