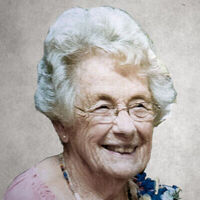 In the event of unforeseen live stream issues, an event recording will appear following the completion of the service. Thank you.

Funeral Mass will be held at 1 p.m. on Saturday, March 20, 2021 at Ss. Peter and Paul Catholic Church in Mankato. Interment will be at Calvary Cemetery in Mankato.

Visitation will be held from 4 to 7 p.m. on Friday, March 19, 2021 at the Northview-North Mankato Mortuary and will continue for one hour prior to the mass on Saturday. The mass will be livestreamed at www.mankatomortuary.com.

Lorraine E., the daughter of Leo and Hyacinthe (Thier) Tacheny, was born on August 6, 1925 in Mankato. She graduated from St. Clair High School and received a business degree from Mankato Business College. On September 16, 1946, she married Calvin Carpenter and together they raised six children. She was not just our mom, but she was our devoted and loving caregiver, confidant and friend. Lorraine was a true inspiration to everyone who knew her. Once their children were older, Lorraine also worked as a bookkeeper at Mankato Cold Storage. Lorraine was passionate about volunteering for Mankato Hospice for over 30 years, bringing communion to patients at the hospital, serving as a chair member of the funeral guild at Ss. Peter and Paul Catholic Church, and teaching confirmation. She was honored to receive the Sertoma Club Service to Mankind Award in 2013, the Blue Earth County Volunteer of the Year in 2016 and was a nominee for the Minnesota State Volunteer of the Year in 2016. Most importantly, Lorraine enjoyed spending time with her children, grandchildren, great grandchildren and great great grandchildren. She also enjoyed card club, playing bridge, 4H, camping with family, gardening, and traveling.

To order memorial trees or send flowers to the family in memory of Lorraine E. Carpenter (Kruse), please visit our flower store.